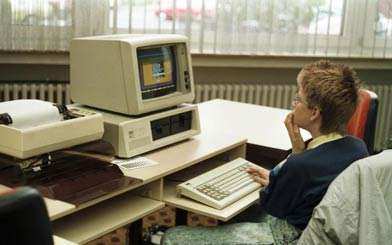 A Quick Look at Personal Computers through the Decades

Whilst computers have been around since the mid-1800s, it was only in the last 60 or so years that computer systems really began to change the electronic landscape. In the 1960s, the microchip was developed and then things started to get interesting.

Originally, computers worked by utilising transistors. The microchip (and later the microprocessor) revolutionised the industry by making computers much smaller. Small enough that we could have them in our offices and businesses. These personal computers (PCs) came in all shapes and sizes. Some were successful, others less so. We are taking a trip down memory lane now to see a few personal computers that led us to where we are today…

IBM 5100 – The first commercially available portable computer in 1975, this IBM machine had a five-inch display, tape drive, 64KB of RAM and weighed approximate 55 pounds. Even so, it was still classified as a ‘portable’ computer. Adjusting for inflation, this piece of kit would set you back for £23,000 today.

The 80s was an exciting time for technology. 1981 saw the release of the IBM Acorn – the first true personal computer. This PC had one of the first Intel CPUs and 256KB of memory. Amazingly successful, the Acorn was selling every minute of the business day by the end of 1982.

Apple dominated the decade, especially with the release of the Power Macintosh. For nearly 12 years, this PC and its variants offered floppy disk drives, high quality Intel processors, high-end graphics and media playback.

Continuing the onslaught of technological innovation, Apple released the MacBook in 2006. Again supported by an Intel processor, the MacBook was the model that changed the game. Bringing the power of a desktop PC to a laptop, it boasted 512MB memory, 60GB hard drive and high definition displays.

Whilst desktops were still used around the world, the MacBook proved that laptop computers were capable of doing the same job. The 2010s showed just what PCs were capable of in terms of technology and innovation. Enter tablets. These portable touch screen computers are fast becoming popular. Their flexibility allows them to be combined with keyboards, signalling a future change from traditional clamshells to detachable PCs.

Technology has become advanced to the point where our very gestures will soon be used to control our PCs. The use of retina scanners is already beginning to be implemented for security purposes, as it fingerprint identification (biometric). It’s also estimated that a shift from using the mouse as a main interface device to touch interface could also be a possibility, along with more advanced power supplies, leading to longer battery life without the need for a recharge.

Personal computers have come a long way since the 1970s. It will very interesting to see how far they’ve developed when it comes to 2070.

This post was written by Jake Messer on behalf of HANDD, a company specialising in Data Security and Managed File Transfer solutions.