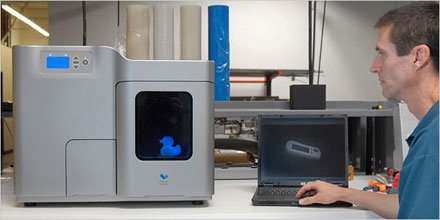 The History & Future Of Desktop Printing

The History & Future Of Desktop Printing

Printing in its broadest sense has been around in one form or another since around 3000BC when ancient civilisations would print bright images on walls, in China and Egypt they later began the use of printing to apply a seal to letters and in Europe printing on cloth almost certainly preceded printing on papyrus in Egypt. The earliest printer that most people will recognise is the flat-bed printing press which was first assembled in the 15th Century in Germany. The device was so revolutionary that it spread across the world and later turned in to the printing press we know today for magazines and newspapers.

This printer was first based on a xerographic copier by Xerox in 1969 and by 1971 they had a fully functional networked printer system which in the future would become a multi billion pound business for Xerox providing large amounts of copies for businesses around the world. IBM however was responsible for bringing it to the business world, in 1976 the IBM model 3800 was brought to market and many are still in use to this day. HP and Canon were responsible for bringing it to consumers, they teamed up to build the first one designed to work with desktop PC’s in 1984.

A dot matrix printer was created in the same way that a typewriter works, by impacting a piece of ribbon soaked in ink against the paper to leave the intended printed mark. The major difference was as the name suggests, there was a matrix of dots meaning that different fonts could be created by only using certain ones. It was linked to a computer of the same name.

The basis of inkjet printing i.e. droplets of ink being fired at the paper to create patterns has been around since as long ago as 1950. As with most aspects of printing however even after the first commercial unit has been released it takes many years to perfect the method. Epson, HP, Canon and Lexmark have been the most successful companies at progressing and marketing the product. The major change since the 1990’s in inkjet printing has come with the price of the cartridges, in the past they would have cost as much as £50 per cartridge however thanks to the web internet ink cartridges are much more reasonably prices.

3D printing first became a reality in 1981 when the first image was successfully printed, since then companies have been working on trying to evolve the mechanism to make it feasible for the consumer market. It is not quite there yet but has come on a long way; you can now get items printed in 3D from companies lucky enough to own one. In the last year the world’s first fully working plastic gun has been created demonstrating the potential the invention has.