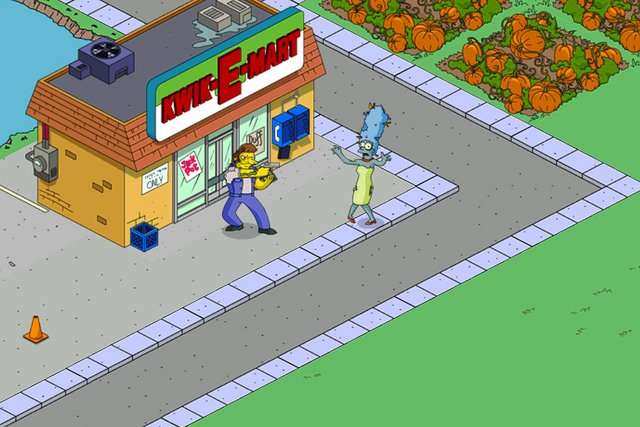 The Simpsons Tapped Out Review

The Simpsons Tapped Out Review

The Simpsons: Tapped Out is a video game that is free with in-app purchases for Android and iOS. This is also known as freemium. EA Mobile is the publisher and developer. The demand for the game was so great upon its launch that it had to be pulled from the iOS App Store because EA’s servers were not able to handle the high demand.

In the game, you can use donuts or virtual money to buy buildings. Some of these buildings include a specific character or are connected to a specific task. You are able to place interactive decorations, pavement, roads and rivers on the land. You advance from level to level by helping your friends, harvesting from buildings or completing quests. Logging in with an Origin account will allow you to vandalize buildings, collect rent money and various other things. There is also an “Other Springfield” that serves as a default setting with every bonus, building and character.

There is also an interesting Easter egg that is included. By tapping Homer ten consecutive times, you can get the statue of Jebediah Springfield. By doing this, you can also acquire ten free donuts.

There have been a few updates that have been issued since the game’s initial release. The current list of updates is as follows:

Released in October of 2012, this version includes new themed items, buildings and characters. It also has a new Halloween-style loading screen.

Five balloons were released in this version. Two of these balloons are premium. The balloons feature Blinky, Scratchy, Itchy, Snowball II and Santa’s Little Helper. There was also a 23rd level added to this update.

This update included new items with a Christmas theme, buildings and characters. It also has a Holiday-style loading screen. Barney’s Bowlarama and the Mapple Store are some of the new buildings that are available.

There are many new buildings, characters, decorations, quests, events and sites in the update. On one of the quests, you can try to make Bart fall in love. The famous escalator to nowhere makes an appearance in this version.

This update features O’Flanagan’s Pub as one of the new buildings. The Leprechaun makes an appearance. You can go on a quest to help Homer and Tom O’Flanagn to promote their bar.

Overall, The Simpsons: Tapped Out offers Simpsons fans a great way to spend their time. The attention to detail on each version is amazing, with many in-jokes that only a true Simpsons fan would be able to appreciate. Based on the success of this game, there is already talk of a sequel being developed. However, there has been no word on what the plot of that game might be.

Why The Military And Aerospace Industries Rely On Metal Plating