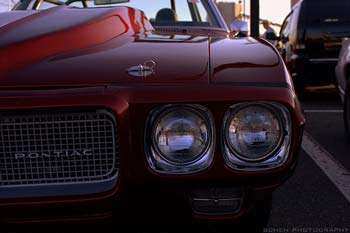 There is nothing like the sound, smell and feel of classic American muscle on the road. Whether you are a “car guy/gal” or not, you can appreciate these machines, there beauty and the power they have. These cars helped to shape a generation and this country. Here’s a list of some of the greatest cars born and bred in the USA.

The 1970 model of the Road Runner brought a new sleeker look the car then its predecessors. The 1970 version was also the last year for the vehicle to have a convertible option. The Road Runner was also known as the “Super Bird”, “Hemi Road Runner” and the “426 Hemi.

You may know this vehicle by another name, “The General Lee”. This was car that was made famous in part by the TV show The Dukes of Hazard.

The Barracuda was redesigned in 1970 and there were now both convertible and coupe options. According to musclecarfacts.com the Dodge Challenger was released at the same time and both had the new E platform.

First appearing in 1966 the Camaro evolved in to a sportier fashion in ’69. One way it did this was by having deep inset headlights and a deep “V” cant grill.

The ’69 model came in coupe or convertible and had the classic Coke bottle styling. The base model firebird was equipped with a single-barrel carburetor and the OHC-inline-6.

You may be wondering what the “KR” stands for. The answer is “King if the Road” and that’s exactly what it was in its time. In the film “Gone in 60-seconds” the holy-grail, so to speak, is a ’67 model named “Elanor”.

Henry Hernandez is a veteran and classic enthusiast. Henry is the marketing director for an Austin based window tint company https://www.shadesoftexaswindowtinting.com/. You can connect with Henry on Google+.

Samsung UNPACKED 5 Is Around The Corner