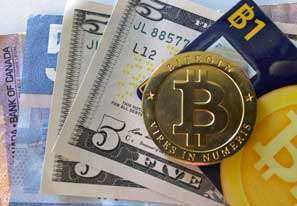 Bitcoin And Bitcoin Apps For Beginners

Bitcoin and Bitcoin Apps for Beginners

Anyone who has spent time online has likely been exposed to the hype around Bitcoin. But for most people, the concept remains a bit fuzzy. Is Bitcoin a new currency that has the potential to transform global payment systems? Or is it just another hype-fueled Internet bubble? The truth may lie somewhere in between.

“Bitcoin has attributes that make it perfectly suited for the Internet economy,” said entrepreneur from Scottsdale Jason Hope. “You can make transactions less expensively and with more anonymity. But it also has to obstacles to overcome. Because of its greater anonymity, public perception has associated Bitcoin with black market activity, fairly or not. And some governments are less than enthusiastic about the idea of an unregulated digital currency.”

Let’s take a look at some Bitcoin basics, including some of the best apps on the market.

Bitcoin is an online currency and payment system that operates over a peer-to-peer network. A peer-to-peer network (the original Napster is one prominent example) allows users to directly swap files between computers. The Bitcoin system was released in 2009 by a developer (or multiple developers) operating under the pseudonym “Satoshi Nakamoto.” Nakamoto’s identity has never been definitively established — one reason the realm of Bitcoin remains shrouded in such mystery and intrigue.

Bitcoins are not issued by government entities, but are “mined” online. This process is fairly complex, but it involves users (miners) allowing their computers to be used to confirm network transactions. Miners can also collect transaction fees, though such fees are optional. When fees are assessed, they are typically lower than the two to three percent seen with credit card companies and mobile payment processors such as Square or PayPal. Bitcoins can also be purchased with or sold for hard currency. They can be traded on online exchanges or bought and sold for cash.

The value of Bitcoins (the name of the Bitcoin system currency) is not fixed and has fluctuated wildly at times since its introduction. The value is currently fluctuating in the $600 to $700 range, but drops or spikes of 20-percent or more are not uncommon. External events, such as the recent ban by the Chinese government and suspension from popular trading platforms, have created havoc with regard to Bitcoin pricing. While some governments, such as Germany, have recognized the currency, its legal status worldwide remains murky.

While Bitcoin use as currency is popular online, acceptance from traditional merchants has been slow to come. That may be changing. Large retailer Overstock.com now accepts Bitcoins, and they’ve been joined by a variety of other businesses, including popular game developer Zynga. Some local brick and mortar merchants accept Bitcoins, but given the tiny number of transactions involved, this acceptance is often more a publicity stunt than practical payment option.

There are a handful of Bitcoin apps available to the public — if you use Android, that is. Apple users are out of luck, after the App Store banned all Bitcoin-related applications in December 2013. The most popular of the Android Bitcoin apps is Bitcoin Wallet, which allows users to pay for items with their phone using Bitcoins. It also shows Bitcoin balances, offers national currency conversion and allows users to send or receive Bitcoins via near field communication or QR codes.

Another app, Bitcoin Paranoia, provides information on current Bitcoin valuation. Users can set this to refresh anywhere from one hour to ten seconds — depending on how “paranoid” they are about the notoriously unstable digital currency rising or falling. There are also a variety of apps that help users mine for Bitcoins, although the process is often so arduous the returns may not be worth the effort.

Governmental bans and the taint that comes with being associated with the black market might lead some to sour on Bitcoin’s future. And those are certainly legitimate concerns. But the value of Bitcoins continues to surge while acceptance from merchants continues to grow. Given the technology’s low cost and other advantages, traditional payment processors have to reason to be concerned. Bitcoin may not radically transform the world’s financial architecture just yet, but it could soon be a major player when it comes to the more prosaic task of exchanging money for goods and services.

[alert heading=”Author” type=”alert-success” block=”false” close=”false”]About Author: Amy Taylor is a technology and business writer. Amy began her career as a small business owner in Phoenix, Arizona. She has taken that knowledge and experience and brought that to her unique writing capabilities. She really enjoys new business related issues that are tied directly to technology.[/alert] [accordion title=”image source” id=”id-here”]

What Are QR Codes And What Are These For?