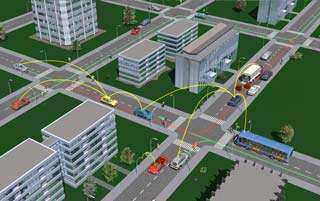 New car technology is changing the way we think about driving on the road. The U.S. Transportation Secretary, Anthony Foxx, is pushing towards providing safer cars on the road. The latest and greatest idea is to let cars talk to each other.

Technology has slowly been improving in cars in recent years, seat belts and air bags have greatly reduced death and injury due to car accidents. The next step that the government wants to introduce is allowing cars to speak to each other. This would include quick communication of the placement of the car, the speed, and the direction that it was heading.

The idea is that the cars would know when it was too close to another one, when a car was in its blind spot, and when it would need to stop in order to avoid an accident. According to Anthony Foxx this technology could prevent up to 80 percent of car accidents in the United States.

When comparing the United States to other countries the safety on U.S. roads doesn’t look so great. According to statistics a driver is 4 times more likely to die driving a car in the U.S. than in the U.K. One of the main reasons being that the use of mobile phones is still legal in 38 states, while it is completely illegal in the U.K. In fact, nine states don’t even ban text messaging while driving, and analysts are quickly finding a high correlation between car accidents and cell phone usage.

The Obama Administration is planning on putting this new car technology in all new cars, and making the technology a mandatory part of car manufacturing. According to estimates it should only drive up the price of a car by about $200.

The technology should specifically assist with getting rid of accidents at intersections in the road. The technology would let drivers know where other cars are located, especially in their blind spots, and through a series of flashes or noises would let the driver know when they may be in potential danger. The cars could also be installed with a mechanism that would automatically stop if they got to close to another car, cutting down on rear end accidents.

The technology has been in testing for a while. It was tested on over 3,000 cars in Ann Arbor, Michigan. The cars all passed the tests and we are expecting more information about the technology to be released within the preceding weeks.

Scott Belcher, the President of the Intelligent Transportation Society, was excited about the move. According to him “Motor vehicle crashes are the leading cause of death for children and adults in the US, with approximately 33,000 people killed and 2.3 million injured each year on America’s roads. While the Auto industry has made great strides to reduce fatalities and injuries after a crash, the next giant leap is to enable real-time communication between vehicles and with the world around them so crashes can be avoided in the first place.”

What Are QR Codes And What Are These For?