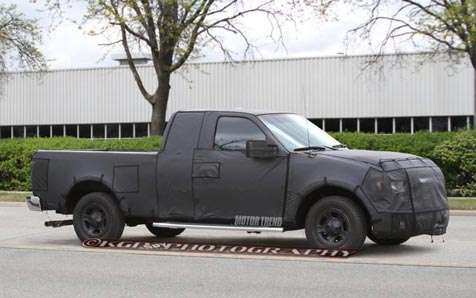 Ford F150s Get A Military Upgrade

The Ford F150 just announced its latest and greatest improvement. The F150 will no longer be made of steel, something that shocked many truck lovers in the U.S. Starting this year it will now be made of aluminum instead.

Before you get angry and claim that this will never work, you should know that this isn’t just any aluminum, this is military aluminum. This material is ding and dent resistant; in fact it will resist damage even better than steel ever did.

That isn’t even the best part of the new Ford F150.  Complete with the new aluminum body, the F150’s total weight will come in 700 pounds lighter. Ford says that they made the decision so that customers could own a truck that actually got good gas mileage, and were still able to retain the usability and functionality that you would expect out of any F150.

Another feature of aluminum is that it will not rust. This is a huge plus to the American consumer, and in the U.S. salt is usually spread on roads to get rid of ice during the winter months. This has caused a lot of rust issues for various vehicles in the past.

With the weight a whole 700 pounds lighter, the new F150 will be able to hold higher payloads, as well as have better towing capabilities. This means that the F150 is getting lighter, but at the same time it’s becoming more useful.

Many skeptics will be glad to know that Ford has tested their design out and submitted their new trucks to over 10,000 million miles of testing. Even better yet, they snuck a F150 into last year’s Baja 1000. The race in Baja is a 882 mile off road loop that is well known for being tough on trucks. In fact, generally the rate sees an attrition rate of fifty percent. Ford decided to give their truck an eco-boost v6 2.7 liter engine, and they disguised it in disguised as a 2013 model. The Ford F150 with the aluminum was able to finish the whole race without a problem. This is a strong testament to the durability and strength of this military grade aluminum.

The new body is working out so well that Ford is considering using it on their other vehicles as well. First however they want to wait and see the reaction from the public and how well the F150 is able to sell on the market. They are fairly confident that drivers will love the added usability and the better fuel usage of the truck.  Dealers are clearing out 2013 inventory now, offering great deals on F-150s to make way for the new models coming down the line.  Truck enthusiasts not convinced about the aluminum bodies are buying up the steel models before they’re sold out.

The truck does still sport a steal chassisframe; however the rest of the F150 will be constructed out of this new aluminum. This means that it will have a strong frame, and you won’t have to worry about the chassis breaking underneath the heavy load that these trucks are usually carrying. It looks like the F150 will still be America’s favorite work, and pleasure truck, and now gas will be a whole lot cheaper for the owners.

Bioplastics Could Be The Material Of The Future