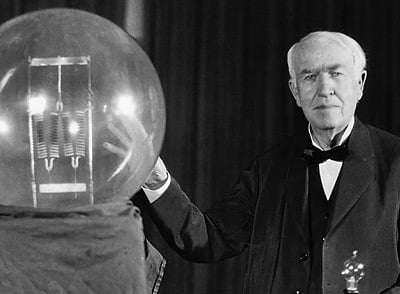 Has Edison Won The Electricity Feud?

Direct current (DC) is making a comeback. Somewhere Thomas Edison is probably pumping his fists and doing the happy dance. Or at least thinking, “I told you so.”

Edison, best known as the inventor of light, was a huge proponent of DC power. Due to the rivalry of his mentee, Nikola Tesla, he lost the power war as alternating current (AC) technology won out. But, recently it appears the battle may not be over. DC power may dominate after all.

September 8, 1878. Edison visited William Wallace’s workshop. Wallace shared his prototype for an “arc light” system which created an eye-searing beam by pulsing current through two tall carbon sticks. Edison was intrigued, but he recognized the problem with Wallace’s design – the light it produced was so bright it could only be used outside or in very large indoor spaces.

Edison believed Wallace was working in the wrong direction. He claimed he could beat him in making the electric light. October 22, just over a month later, Edison did. His electric light bulb lasted for 13.5 hours.

Tesla Comes into the Picture

Tesla began working for the Continental Edison Company in 1882. After his supervisor wrote a glowing recommendation, comparing him to Edison himself, he was invited to work stateside. The two men were drastically different. Edison’s discoveries were based primarily on a tedious number of experiments, while Tesla’s were driven primarily by his dreams. Edison lacked formal education while Tesla had an extensive background in engineering. Tesla was meticulously clean, to the point of being a germaphobe, while Edison was less interested in hygiene. Despite their differences, Edison thought Tesla’s ideas were both splendid and at the same time utterly impractical.

Originally, Edison created DC technology to supply power. Tesla was insistent he could increase the efficiency. When Edison gave in and allowed Tesla his chance, the younger man worked tirelessly. Edison joked if Tesla succeeded, he would award him $50,000. Yet, when Tesla developed AC technology, Edison offered him a mere $10 per week raise.

Tesla quit. But, he eventually raised enough money to found his own company – the Tesla Electric Light Company. Selling most of his patents to the investor and entrepreneur, George Westinghouse, they began a partnership that would eventually popularize AC power.

DC technology provides lower voltage to the consumer, which Edison argued was safer. AC technology allows large quantities of energy easier to easily be transmitted. The DC/AC debate was a bitter feud fought with grand publicity stunts such as when Edison electrocuted an elephant to display the dangers of AC power.

Most of today’s household appliances run on DC power because they can’t handle the alternating current floods that come from AC power. Most generators produce AC power, so when it arrives in your home it has to be converted into DC power. This conversion is rarely efficient. It typically wastes between 5 and 20 percent of energy.

A consortium of agencies and industry groups known as Emerge Alliance now believe DC power will make a comeback. To create a modern way to harness energy that can run our power grids more effectively, major studies have begun to examine ways DC and AC power can work together.

Edison’s vow to his secretary Alfred O. Tate, he would do something “so much bigger…people will forget my name was ever connected with anything electrical.” While this never happened, he might just have the last laugh after all.

The author of this article, Nicole provides advice and information on the lighting industry, including lighting innovations, lighting towers, and more.

Future Microwave is among Us (Video)