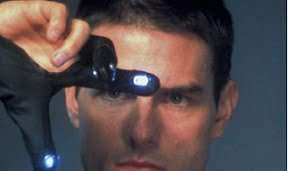 The Ring: Minority Report Made Real?

The Ring: Minority Report Made Real?

It might be fair to say that Steven Spielberg’s early-ought’s sci-fi flick Minority Report sparked the imagination in much the same way as Star Trek did in the 1960’s. As Star Trek was integral in inspiring the personal computer and the cell phone, Minority Report arguably had the same impact on user interface technology. Had we not seen Tom Cruise commanding a supercomputer with his fingertips, would we have the Nintendo Wii and the Xbox Kinect? Would touchscreen controls be quite so sophisticated as they are today? Maybe we would have, eventually, moved away from the mouse, controller and keyboard as our primary input devices, but it may well be that seeing that vision come to life in a multi-million dollar sci-fi spectacle kickstarted designers the world over to get it in gear.


Of course, a decade later, we still haven’t quite reached the precise, point-and-touch controls seen in Minority Report, even as the average smartphone has far surpassed the communication devices seen in Star Trek and even the titular device from the Hitchhiker’s Guide to the Galaxy (log on to Wikipedia with an iPhone and you’ve basically got the Guide right there in your hands). What we lack is articulation. The Nintendo Wiimote knows when you’re swinging the controller around, and while we’re getting closer every day, perfect 1:1 analog control that is as precise as the push of a button isn’t quite here yet.

A project being launched on Kickstarter right now may make imprecise motion-control input a thing of the past. The Ring, a (somewhat bulkier) wedding-band style ring worn on the index finger aims to provide more precise input based on the user’s motions than the broader, wand-like input of the Wii or Playstation Move controllers, with more instantaneous feedback than you’ll get from the Kinect. Basically, it’s a touchscreen that you don’t have to touch. As of the time of this writing, the Ring has nearly doubled its Kickstarter goal of a quarter million dollars.

The Ring’s slogan is “Shortcut Everything,” and the Kickstarter page showcases some of the ways that the device will make life a little more convenient, using gestures to play music, text (by writing letters in the air) and interact with software. Although the Kickstarter page emphasizes convenience, it’s easy to imagine even more dramatic new horizons made possible by such precise input:

Gaming is an obvious one. Imagine a game of Street Fighter that can read your moves in realtime and feed them into the onscreen character’s behavior. Even beyond gaming, applying this level of precision to other kinds of virtual interaction could really change the way we think of, say, music composition software, when you can play virtual instruments. Pick up a virtual paintbrush in Photoshop and create an oil painting with 1:1 movement. Test drive a virtual Ferrari from your desktop. The possibilities are endless.

Limited mobility prevents some people from even using a text-to-speech keyboard to communicate. The minimal input required by the Ring could change the lives of many living with physical disabilities.

Home automation is referenced in the Kickstarter page, but a lot more possibilities remain open. Cars that unlock and start the ignition when you walk up to them and lock up when you walk away, computers that go to sleep when you’re not nearby, smartphones that can tell when you’re reaching for them. Proximity plus motion control means new horizons in automation.

“Logbar Inc. have, at the very least, broken the ice when it comes to giving this kind of input to consumers,” comments technology expert Jason Hope, “whether or not the Ring winds up being everything that was promised.”

Of course, we will simply have to wait and see how precise and how useful the Ring really is, but with customizable gesture controls and SDKs available for the asking, it’s easy to imagine that developers will cover every base that the Ring’s creators may have overlooked. As of the time of this writing, the Kickstarter is still open to donations for those who want to get in on the ground floor, with the page trending very strongly.

About Author: Amy Taylor is a business and technology writer. Amy began her career as a small business owner in Phoenix, AZ. She enjoys writing about business technology trends. When she isn’t writing, she enjoys hiking with her Alaskan Malamute, Sam.

The New Wave of Laser Welding