It is generally agreed that the inventor of the jigsaw puzzle was English map maker and engraver John Spilsbury. Around 1760 Spilsbury created an educational device by attaching a picture of England to a thin sheet of mahogany and then cutting out each of the counties using a fret saw. In succeeding years others copied his idea producing puzzles with geographic and historical themes which were aimed at children and were for educational purposes.

By the 19th century puzzles were popular amongst wealthy children who were the only ones whose families could afford to buy the devices. Puzzles were fashioned from expensive fine woods and although containing few pieces and only having interlocking pieces to the edges, were labour intensive to produce. Later in the century the industrial age saw the discovery of new techniques to produce thinner sheets of wood, improved printing processes and the invention of the treadle operated jigsaw (hence the adopted name of the games). These factors made it possible to produce more intricate jigsaws with a wider range of subjects for the images. Adults began to take an interest in the games and soon they soon started to gain in popularity. 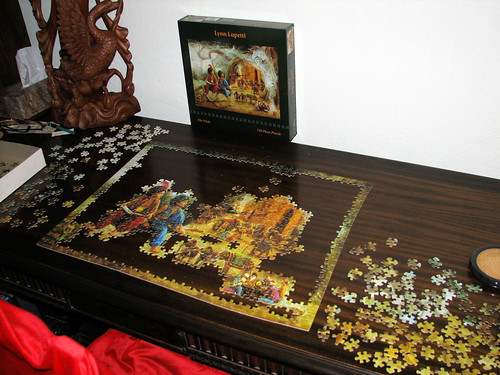 The jigsaws were still rather expensive and the subject matter aimed at the upper classes but innovations introduced by German Raphael Tuck and his sons were soon to make the games more commercial. The Germans produced  varied and colourful images, they introduced more intricate cutting techniques, started to use plywood and thick card instead of costly hardwood and introduced attractive packaging including the image of the puzzle for the first time.

As the 20th century dawned Tuck’s ideas arrived in America and soon puzzles were all the rage. Demand was increasing rapidly and so new production methods were required. Manufacturers Chad Valley and G.H.Haytor developed a new procedure called “Stack cutting”. Here up to 8 jigsaws could be laid on top of each other and cut at the same time but the puzzles were still costly items. In the 1920’s a new technique was developed to die cut cardboard and this dramatically reduced the cost of producing a jigsaw. Renowned games company Waddingtons invested in the new procedure and turned out games with up to 1000 pieces which almost everyone could afford to buy. Since that time not much has changed in the production of cardboard jigsaws other than the ever improving quality of the images used.

Today you can buy jigsaws bearing every conceivable image and with everything from a handful to several thousand pieces. Whether you require a Melissa and Doug jigsaw fashioned from wood for your child or a complex Ravensburger 1000 piece game for yourself you will have a huge choice of images and styles to select from. Puzzles can now be double-sided, holographic and contain varied sizes of pieces. You can find spherical puzzles, three dimensional puzzles and jigsaws that glow in the dark. You can even do jigsaws online so who knows what innovations will come next?

Sally Stacey is a keen writer who has completed a few jigsaws in her time despite the intervention of some very cheeky cats!

No Waiting In Line At Restaurants Anymore (Video)Featured News, video