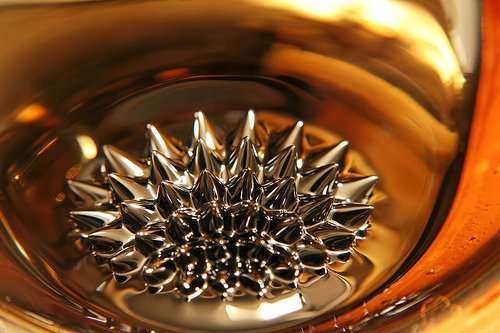 Since the dawn of time, humans have come up with ingenious ways of combining natural materials to produce man-made substances. We use things like plastic and paper every day, but here we examine some of the mind-blowing and seemingly physics-defying man-made materials that science has given us.

This amazing heat-resistant material was invented by former hairdresser Maurice Ward, who reportedly came up with Starlite using a food processor in his kitchen. It gained publicity in 1991 when it was featured on the BBC programme Tomorrow’s World, during which Ward held a blowtorch to an egg coated in Starlite. Despite five minutes under extreme heat, the egg remarkably remained raw inside.

Unfortunately, Ward has never revealed his secret and has stubbornly refused to allow Starlite onto the market – all that’s known about it is that it contains 21 components.

Ward died in 2011, and though his family allegedly know how Starlite’s made, they have yet to divulge anything about the material.

British and American scientists have been researching liquid body armour for a number of years now, and evidence suggests that it could be a viable alternative to bulkier types of bullet-proof armour.

It comprises a combination of Kevlar with a shear-thickening fluid, or non-Newtonian fluid, made from silica particles suspended in polyethylene glycol. The shear-thickening fluid responds to the force of bullets by becoming much thicker and stickier, meaning that the armour is lighter and fewer layers of Kevlar are needed than in conventional body armour.

The material, developed by BAE Systems, could well become commonplace in the military in the coming years.

Two researchers from North Carolina University have developed elastic conductors that could be used in electronic devices. The material is made from embedding carbon nanotubes in a polymer, and could be used to produce mobile phones and laptops that compress and stretch.

Scientists are very excited about this development as the material can withstand substantial stretching without its conductivity being reduced. So maybe we’ll see an iPhone 6 with a stretchable screen…

Ferrofluids are essentially liquids that become highly magnetised in the presence of a magnetic field. They are colloidal liquids made of nanoscale ferromagnetic or ferromagnetic suspended in a carrier fluid – usually water or an organic solvent. They have a wide range of applications, including forming seals in hard disks, magnetic drug testing and providing heat conduction in speakers.

Created in 1931 by American scientist Samuel Stephens Kistler, aerogel (or ‘frozen smoke’ as it is nicknamed) derives from a gel in which the liquid component has been replaced by a gas.

The most incredible thing about aerogel is that it consists almost entirely of air, weighing little more than the stuff we breathe. Despite this, it can support over 1000 times its own weight and aerogels also make excellent insulators.

There are different types of aerogels and their uses include astronaut suits and window insulation.

Not only do these amazing materials defy nature, but they also have a load of practical uses in the real world. Scientists are experimenting with new mixtures all the time – who knows what they’ll come up with next?

Know of any other amazing manmade materials? Share them in the comments!

Joseph is a university graduate who has blogged on a wide range of topics, including science. Here he writes for JBI Insurance.

The Car Of The Future