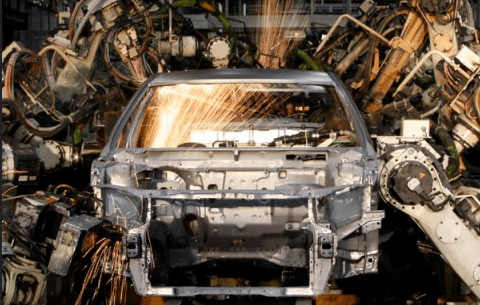 The advent of robotics has been a huge boon to the manufacturing industry in the last half-century. There are countless reasons why robotics are introduced into manufacturing processes: They can work in conditions that humans can’t endure, and complete tasks that humans can’t complete, and there’s no risk to their health or safety. One of the first digitally operated and programmable robots, the Unimate, was used as early as 1961 to move and stack hot pieces of metal from a die casting machine. Another reason that robots are a vital part of modern manufacturing is that they can complete the same task over and over again, at high precision, without the introduction of human error.

It’s a simple fact that humans make mistakes. We’ve all heard the phrase, “I’m only human.” It’s just a part of our nature. And even if we don’t make mistakes, there’s a certain amount of variation in how we perform the same task, especially if we perform it over and over again. In order to precisely reproduce a task, we have to measure each time. With a robot, once the measurement is taken, it reproduces the task exactly over and over again, however many times is needed.

This elimination of human error can be extremely valuable in production, especially mass-production, but it can also be of great help in other processes, including when keeping our edged tools sharp and well-honed. Recent developments in robotic loading processes—like the MET-4 Auto Load from Mutschler Edge Tech—have helped take the element of human error out of edge prep machine operation. With the MET-4, a robotic loader uses a gripper to pick up tools and load them into the machine, where they’re clamped into place with an air-chuck and then sent through the honing process normally. The addition of the robotic loader reduces the amount of operator labor that’s needed to run the machine, and minimizes tool damage during the loading process.

The robotic loader attachment is kept free from the work area, which may contain dust, debris, or other residual airborne materials that could damage the robot’s complex machinery. The design also reduces unnecessary wear and tear on the complex robotic components by ensuring that most of the stress is actually placed on the edge prep machine itself, rather than on the robotic loader. The only stress put on the loader itself is the weight of moving the tool from point A to point B.

The implementation of auto-loader features like the MET-4 has already seen success in the edge prep industry, and this company is already planning to make all their future machines “factory ready” for the addition of a robotic loader, meaning that the auto-loading program and the machine will be ready to use the auto loader, and will just have to be activated once the robotic loader is in place. As they have in the rest of the manufacturing industry, robotics have found their place in edge prep technology, eliminating human error and allowing processes to run more smoothly and precisely than ever before.

Justin utilized the services of Mutschler Edge Technologies (MET) in Cleveland, Ohio.  They helped him apply standard and custom edge preparations to his cutting tools.