Recently a smartphone battery was developed which claimed that it can charge a smartphone with an unbelievable speed. This can be categorized under the nanotechnology umbrella as well. The credits of taking this initiative can be given to an Israeli start-up who unveiled the magnificent invention of a battery. StoreDot was the one which demonstrated how exactly the battery charged so quickly and a live demonstration was shown. The demonstration was shown at Think Next, sponsored by Microsoft.

StoreDot first showed Samsung’s S4 and its battery was dead initially. Then by using the battery charger, it was observed that just under 26 seconds the Samsung S4 went from 0% battery to almost 100%. When asked regarding the dynamics of the battery, it was stated that the battery was made of unique biological structures that used tiniest crystals made of peptides. Such peptides have unique properties and characteristics which give immense power to the battery charger in functioning like a lightning bolt.

With such new physics, the founder of StoreDot stated that most companies were ignoring the market for batteries. Such discovery of physics regarding the battery has enabled StoreDot to empower smartphone users even more which means that soon in future the invention will evolve to an extent which will eliminate the need of a battery. 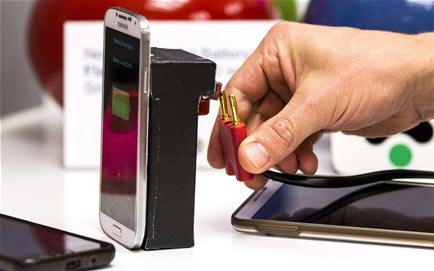 The prototype that StoreDot has shown is quite large and does not seem to be compatible with the slim smartphones that are trending these days. Due to this reasons, it will become a bit difficult to carry around which will kill the characteristic of being portable. Hence StoreDot has claimed that the idea will be revisited to that it can be made compatible. It is rumored that the batteries will be sold for around 18 pounds which is twice as high as a cost of a phone charger.

StoreDot was initially more focused on solving the Alzheimer’s disease but with more exposure to technology, it has decided to expand its research towards batteries, screens and even hard disks, all with the help of the same crystals that were used to build the prototype battery. Since StoreDot has taken up a great initiative that can revolutionize the smartphone industry, it is rumored that Samsung is backing StoreDot by giving them 3.5 million pounds for the research.

Moreover, an American teenager called Eesha Khare is also researching in a similar field and has claimed that her technology can charge a phone in 20 seconds. It is also rumored that StoreDot has joined forces with Eesha Khare to build a monster technology in collusion.